Win Your Share of Lost Fortune On IGT’s Cleopatra Plus 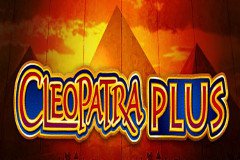 After the titles Cleopatra and Cleopatra II, the British gaming company IGT has released another video slot inspired by Egypt and one of the most prominent women in history.

Cleopatra Plus is a 5-reel 40-payline video slot taking you on a journey through Alexandria, the Nile Rover Valley and the Pyramids of Giza where you can win huge prizes due to a variety of rewarding features which are available depending on the level of the game you play at.

Free spins, multipliers and bonus wins are the features you can expect to win once you start spinning the reels of this highly entertaining slot machine with crisp graphics and intriguing sounds.

We love the thrilling gaming experience the slot provides us with as we advance through the levels due to Level Up Plus feature. Look out for Scatter depicted as the follower and collect as many of them as possible because they are the key for higher levels of the game during which your reels and odds of winning will be enhanced.

Scatter also triggers the bonus game which may award free spins, multipliers and bonus wins.  As you advance, both the base and the bonus game get more lucrative due to high value symbols depicted as deities appearing in stacks on your reels.

The most lucrative symbol, however, is Cleopatra Plus Wild which replaces all regular symbols and doubles all payouts from the combinations in which it is included. What’s more, it may come in stacks and cover your reels entirely which will result in huge winnings. 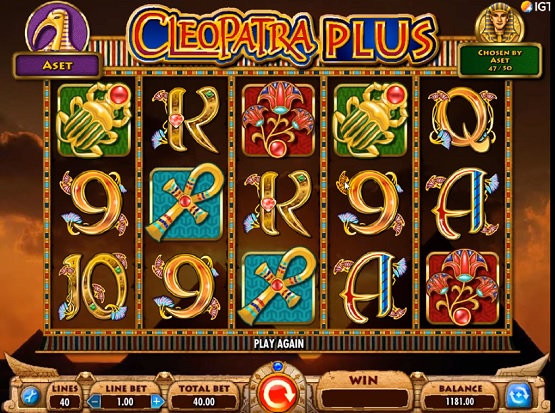 The theme of ancient Egypt has been used so many times by software developers and become a commonplace when it comes to slot machines.

Besides, Cleopatra Plus graphics look a bit dated, more like those which can be seen in land-based slot machines. The gameplay may seem a bit complex due to all the bonus features and levels, so we recommend that you visit the paytable and read thoroughly all the rules before you start spinning the reels.

The biggest problem with IGT’s slot machines is the fact that they are not affordable for penny punters as you can wager between $40 and $4,000 per spin, which are quite big sums. During the base game you will rarely hit a winning combination comprised of high value symbols.

If you are ready to risk larger sums, this game can be very rewarding due to all its features including Level Up Plus feature which provides you with the unparalleled gaming experience on the market.

Not only that the game is suitable only for high-rollers, but you have to be prepared to spin your reels for a long time in order to collect all Scatters needed to unlock all the levels of the game. Be patient and persistent enough and you will be properly awarded for your efforts with the Cleopatra Plus slot.