Set upon a backdrop of flickering flames, this game features glowing symbols created in what appears to be unimpressive graphic presentation, but with a mystical feeling around it.

Game’s creators have adopted a ground-breaking MultiWay Xtra engine, which makes this platform a unique experience for all gamers.

The gaming world was taken by storm with the latest MultiWay Xtra technology which enhances your chances of claiming a win through possibility to line a winning combination from utmost left to right and vice versa.

In addition, Fire Horse offers a unique visual presentation when it comes to reels themselves. Shaped in a form of a diamond, five reels have 3, 4 and five columns.

Reels one and five are composed of three columns, reels 2, 4 boast four and the middle reel is comprised of five columns and is the only one offering the Stacked Wilds that put an extra spin to the games winning potential, which is yet another thing we love about this game.

You will be presented with eight free games initially, but the MultiWay Xtra technology increases the number to whopping 96 free spins in total. That is not all as this feature can be re-triggered and a special blue orb is now there to give you as many as 240 free spins if you get extremely lucky. 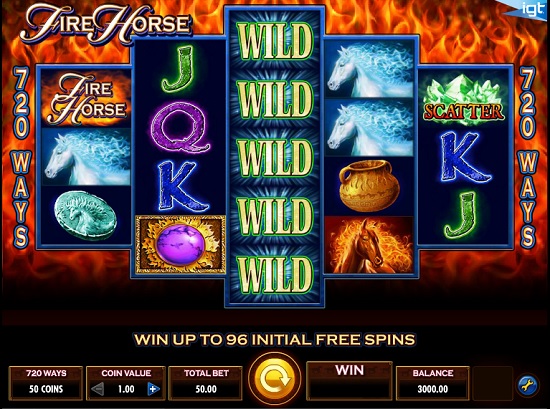 What We Do Not Love

Well-paying symbols make this game great fun, but they are not easy to achieve and that is something that needs to be taken in consideration.

Fire Horse is available with coins valued from 1 to 50, which makes this game quite expensive knowing that your maximum bet with the top coin denomination of 50 reaches $2,500. IGT have thus created a game unaffordable for the beginners and casual players with somewhat a limited budget.

What is more, the total of 720 ways to win indeed offer frequent winning combos, but those hardly make up for the cost of your bet.

Finally, we haven’t been that impressed with the graphical design of the game. Fire Horse does feature a unique layout with its diamond-shape reels, but visuals are not that appealing as they lack modern look and seem out of date. Simple animations have been stirred with an exploding touch from time to time when you hit a combination of Wilds though.

As you play, you will hear mystical sound effect accompanied with a nice little jangle every time you line a winning combination, but the overall audio can get a bit tiresome after a while as well.

Some gamers would argue that Fire Horse is an over the top video slot and that IGT have tried too much to create the most amusing and inventive game that they ended up doing quite the opposite.

The title of the game will have you confused right from the start, while its 720 ways to win could only push you in the wrong direction.

The MultiWay Xtra technology is a commendable detail which enhances your chance of claiming a win so you should definitely try this game out if nothing else then just for the kick of it.